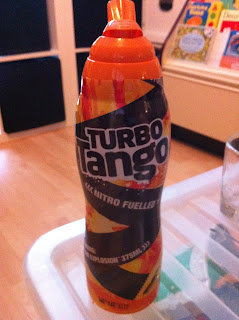 "Hey guys, we've been selling regular Tango for a while now, I think it's time to spice things up."
"Well, what do you suggest?"
"How about a drink in aerosol form?"
True story.

Yes, despite the odd looking bottle, I was not expecting Turbo Tango to be so weird. It's basically a foamy orange soft drink, but it's pretty much like having some watered down, orange flavoured squirty cream and just unloading it into your face. Here's what the stuff actually looks like: 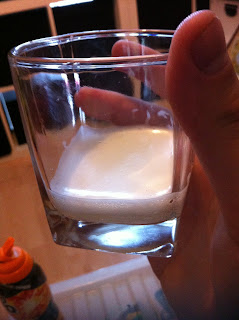 Yummy. Normally if you get this stuff in a glass when pouring a carbonated beverage, it's closely followed by impatiently waiting for it to go away. But Turbo Tango isn't actually that bad. Once you get used to the fact that you're spraying it into your mouth, it just tastes like slightly foamy Tango. It does get a bit sickly after a while, but the overall product is quite nice. I suppose the whole squirty aspect is a fun novelty, but I'd feel slightly idiotic doing it in public.