I went to Florida back in 2008, and it was a particular desire of mine to really experience the American lifestyle by visiting a couple of malls. In the Florida Mall, however, was something a little different. An M&Ms store. One of only two in the world, the other being in New York. Now there's on in London, and that excites me, but I digress.

Upon entering the store you are greeted with massive tubes of M&Ms. Every colour you can imagine, and you can just fill up a bag and take them, which is just what I wanted to do. But there was a special offer on. Spend a certain amount of dollar on M&Ms merchandise and you got a bag for free. Challenge accepted, I thought.

There is a lot of M&Ms merchandise. Amelia, at that time just over a year old, had her mind set on a basket ball. It was pretty cool, so I picked up a couple of shot glasses for presents and was almost there. Then I spotted this tie: 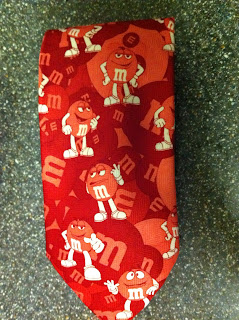 "Wow, awesome! This tie is really wacky and cool like me" is what I assume I thought at the time, because lookign back I have no idea what I was thinking. Look at it. Just look at it. Who would wear that tie? I wore it yesterday to work, but that's because we were dressing up as clowns, and in lieu of an actual outfit I wore the most ridiculous clothes I owned. This tie is in fact the most ridiculous thing I owned.

I guess at the time I thought I could wear it outside as part of my slightly outlandish dress code, but every time I wear something the thought of accessorising with this tie is enough to make me shudder. I have no idea who would seriously wear this tie, because I can't even wear it when I'm not being serious.

It strikes me as the kind of tie some obnoxious office worker wears in order to convey his sense of fun, because his tedious career has managed to crush the ability to express any kind of joy out of every facet of his body. His only option is to attempt to connect with the joy of being alive by drastically altering an element of his suit. The result, however, is people saying "Oh yeah, John, he's the guy over htere with the stupid tie".