I loved Golden Grahams when I was a kid. I don't remember having too much control over which cereals my parents bought, I tried a lot of cereal, but Golden Grahams is the one that always stuck in my mind. Most likely because one day, they just vanished, leaving behind their evil twin, Cinnamon Grahams. I hate Cinnamon Grahams, now aptly named Curiously Cinnamon, as in "I'm curious as to why anyone would want to eat this crap". Let me tell you a story.

I went to stay with my grandparents for a week or so one summer. One morning I awoke to the regular breakfast table. Various cereals, a toast rack and the like (I swear I haven't actually seen a toast rack since the 90s, and I don't miss them). Nestled among the cereals was what I thought to be Golden Grahams. "Oh hell yeah!" I thought, but probably in more childish form, and proceeded to pour myself a massive bowl of them bad boys. I took my first bite with glorious anticipation of the crunchy honey loveliness. Instead I got a mouthful of fucking cinnamon. I literally almost puked. Needless to say I did not eat the rest, and was appropriately scolded by my grandmother. I say it's her fault for putting the cereals in those weird plastic cereal containers. Seriously, who buys those? Cereals already come in containers, they're called boxes. Anyhow, this incident most likely left me with my lifelong hatred of anything cinnamon related. Thanks grams.

The story was somewhat pointless, but I'm sure in a way it highlights my lifelong love affair with Golden Grahams. I can't say I was absolutely devastated when they disappeared from the shelves, I was probably too busy eating Frosties or some other second rate cereal, in my stupid childish ways. It was not until 2003 that I would once again reignite my passion for this cereal, when I visited America and was greeted by cereals i'd wanted to try or hadn't seen for a long time. I bought Lucky Charms, another childhood classic that was snatched from my grasp. However, they were entirely disappointing. Give me a bowl of Trix over them any day. But Golden Grahams reignited my passion and I fell in love all over again. Most recently I brought a box back from Oman, last October, and those few days of breakfast excellence were unmatched. Then they were, once again, gone.

Until a couple of days later when I went to Tesco and found them on the shelf, for half price no less. "Shit yes!" my brain cried, 'cause I'm older now and can use swears. I eagerly snatched up two boxes (no need to be greedy) and rushed home, after sensibly doing the rest of the shopping I went there for. This time my daughter Amelia got in on the action, and she enjoyed them too. Balance was restored in the universe. I read up about why they'd disappeared in the first place, something about high salt content, but that doesn't make sense, because i'd have willingly eaten a pile of salt to have Golden Grahams back in my local supermarket.

After a couple of weeks, Golden Grahams prices rose, and I was tempted back to cereal that was cheaper, because I'm a bit poor and the novelty had worn off a little. But this week I bought some more. Amelia remembered them (no dammit, they're mine, all mine!), and wanted them this morning. 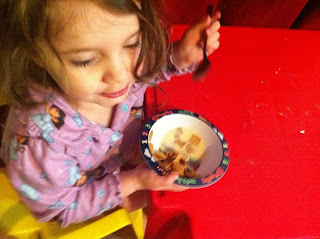 She normally eats Coco Pops (or the cheap Tesco equivalent) every day. Without fail. This is how good Golden Grahams are. Kids prefer them over eating chocolate for breakfast. Amazing. After watching her eating some, I couldn't stand it any longer. I had to get me some. 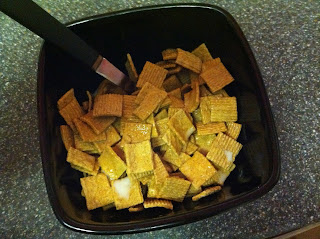 So far my bowls and spoons are the most featured thing on this blog.
Oh boy. I couldn't wait to fill my mouth with honey flavoured crunchy goodness. But within literally five seconds of sitting down, I was confronted by this: 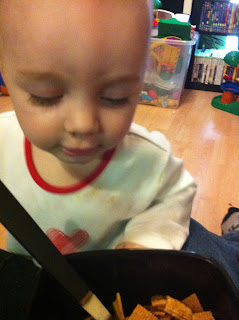 My son, Alex, peering over the bowl, grabbing the spoon, repeatedly saying "Dat". Begrudgingly, I shared. But we all had a good time. And there are more good times to come.

I'll say it again. Golden Grahams are fantastic. If you haven't tried them do so immediately. If you don't like them, there's probably something wrong with your tongue. The only downside I did notice today is they got soggy way too quickly. It may have been my mistake in miscalculating the milk:cereal ratio, but until someone invents a milk spraying machine especially designed for optimal cereal crunchiness, it's an uphill battle we'll face every day.