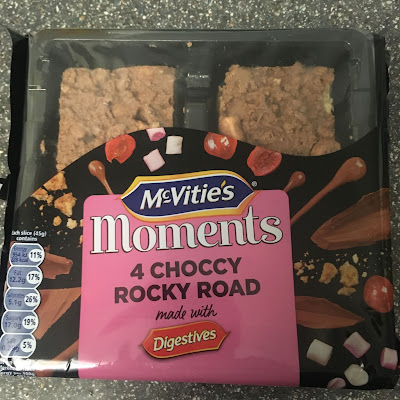 McVitie's are going a bit fancy with their biscuits, they've brought out a range of interesting concoctions centred around their classic brands, and this is the one I went for today. Here we have four little slabs of rocky road, made with Digestives, and pulled together with chocolate, marshmallow, crisp cereal and cherries.

These aren't bad, there's a bit of a heavy focus on the biscuit, but all the elements are noticeable. The marshmallow adds a satisfying chewiness, the cherries give a nice burst of flavour. I wouldn't say the cereal adds much to the experience, especially since it's already pretty heavy on the biscuit. Also, it could probably do with more chocolate, there's enough to give it that overall flavour, but as a whole these squares were a little dry. So yeah, they're alright, but with a retail price of £1.70 I don't think they're really worth it. I picked them up for £1 and was still a little disappointed. You'd be better off making your own rocky road, just grab some Digestives and make sure you've got a load of chocolate.