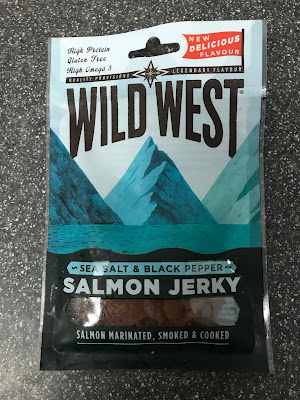 I spied this pack of jerky while walking around Poundland, and immediately did a double take. I'm used to beef jerky you see, so the sight of this filled me with both disgust and wonder. Eventually I gave into the latter, I just had to see what dried marinated salmon was like.

Turns out it's not too bad, not nearly as fishy as I thought. Sure, it tastes like salmon, but the dehydrating process has really beefed up the meatiness, if you'll excuse the phrase. It's somewhat reminiscent in texture to beef jerky, but obviously with that salmon flavour. The salt and black pepper aren't particularly overwhelming, and don't add a whole lot to the overall taste. but hey, they're there at least. Overall, not a bad little snack. I still prefer beef jerky, but this is a good substitute.