Alriiight, time to take in the sights. We set off early this morning to Jebel Akhdar, a huge mountain range just over an hour's drive from the house. We've been there before, and had a little wander through some of the tiny villages near the top, but this time we were going to one of my dad's colleague's (Mohammed) houses for some proper Omani cuisine. Exciting.

We met Mohammed's son at the bottom of the mountain and I got into his car, as you're not allowed through the checkpoint with more than six people in your car. Presumably because if seven people plunge to their death due to failed brakes the paperwork load is considerably larger. But we were all good, and before long we were going up the twists and turns of the steep roads going towards the summit. After the initial climb I was treated to the sights of the range spreading into the distance, with natural folds and textures that are a wonder to look at. I was also mulling over how best I would leap out of the vehicle and save my family should the brakes fail on their car behind me, but hey, that's just me.
After a particularly curvy and steep section of mountain, we got to Mohammed's village. With my life now out of immediate danger I could fully concentrate on things. Mohammed's house is massive. He told us that in his other house it was hard to move around, so he just built a house with absolutely massive rooms instead. He gave us a small tour, before we were ushered back into the guest room. And along came the food. 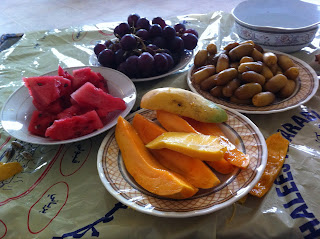 Lots of food. Awesome food. Look at those grapes, they're massive. After remembering not to eat with my left hand like normal, because that's how I'm suppose to clean myself after making toilet, I nommed heartily. Next came the coffee to wash it all down. Tiny cups, but a very distinct flavour. 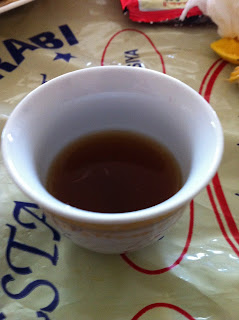 But that was just the beginning. The main course wasn't ready yet, so off we went for a tour of the village, including the ruins of the old houses, some of which were destroyed during the Jebel Akhtar war. Some good views of the mountain ranges too. 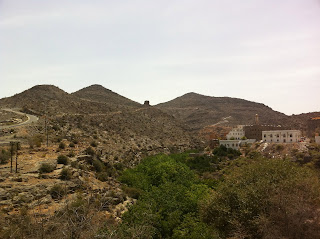 But soon enough it was time to eat. We'd visited Mohammed's other house on a former trip to Oman, and it was probably my most enjoyable experience of the holiday, so I was highly anticipating doing it again. I was not disappointed. 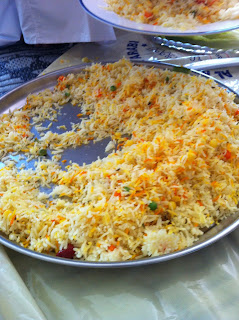 Rice. So much rice. This is what was left after everyone was given a portion. Omanis eat a lot of rice. More rice than your standard Brit can handle, which caused Mohammed to continuously ask why we weren't eating much rice. The correct answer was "because my stomach is about to explode", but that probably wouldn't be the polite thing to say. Anyways, also on the menu was chicken curry. 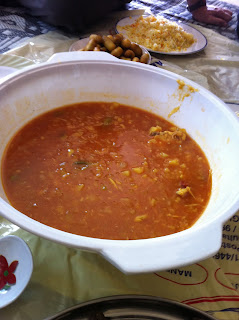 Pretty damn good. Large pieces of chicken on the bone, wonderfully cooked. Not too spicy either, which was welcome after a walk out in the sun. I enjoyed it, but what I was really looking forward to was this: 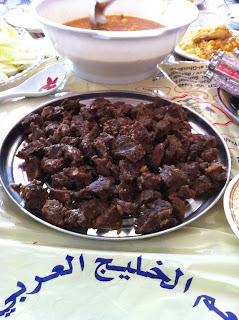 I've dreamed about this beef. It's probably some of the best beef I've ever tasted, and it was cooked in a hole in the ground. The first time I had it it was so tender, almost crumbled in the mouth, and it tastes so so good. This time Mohammed apologised for it not being cooked for as long as normal, but his family had only arrived at the house that day. Sure, it was a bit tougher than before, but that didn't stop me eating four portions. So good, so good.
We were provided with forks and spoons and the like, and while I was thinking about eating the Omani way, the food was a tad too hot to squish into my vulnerable palm. But I sat on the floor, and accepted most of the things that Mohammed offered my way. Lunch is a big thing in Oman, they eat craploads and then have a siesta. I can't see a single thing wrong with that, but Mohammed was clearly weirded out that we were eating so little, and started to apologise that we didn't like his food. But a prompt explanation by my dad that we English are just pussies when it comes to big portions sorted things out.
After lunch, some nice sweet tea and a small chat, and we were off. We went to a couple of other viewpoints near the summit, from one of which I could see the village we stopped off at before. 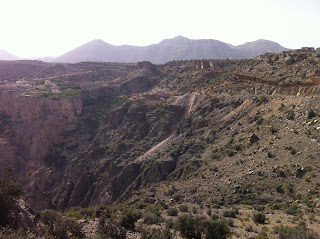 We were pretty high up, about 2,000 feet, but the villagers have managed to divert the spring water from the mountain down through a falaj in order to grow crops on the cliff face. I walked along one of these last time I was here, and it's cool to see the intricate pathways that have been made, with rags placed at certain points to block water flow to different areas.
But it was getting late, and the kids were getting cranky, so homeward bound we went. But it was a very enjoyable day. Jebel Akhtar is probably one of the most astounding sights of Oman, and the culture you can experience in some of the villages is second to none. Mohammed's family were wonderful. They gave us a friendly reception, the young ones played well with the kids, and of course they served us massive amounts of awesome free food. Cannot complain at all.
My rating: 5/5
Posted by Dan Bishop at 11:07