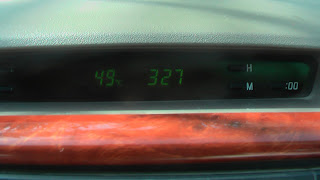 Just sayin'. So, I was woken at 5:30 this morning. That sure was fun. But I had some time to take a nap before we headed out. Good thing too, we went to quite a few places. Which means I took in  bit more culture. Not too much though. First stop was the aquarium, or as the Omanis call it: 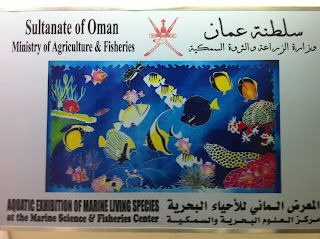 Much more catchy. Really it was just one room with a few tanks. But entertaining enough. I saw this guy, who I named "Grumpy Leopard Lookin' Motherfucker": 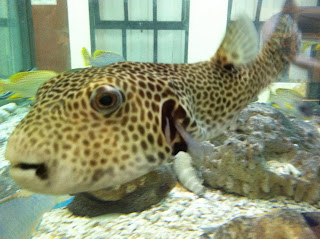 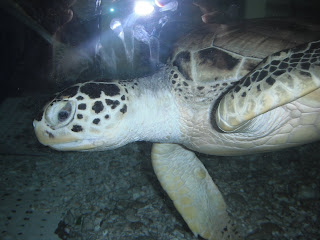 Also turtles. I like turtles. But with the fish seen, it was now time to eat some. So to the Blue Marlin we went, a restaurant by the marina where rich British folk keep yachts they hardly use. I tried to get something exotic again, but they were all out. Presumably because the British don't like all that spicy crap. So fish and chips it was, but I delved into a Red Bull and watermelon juice for tropical support. 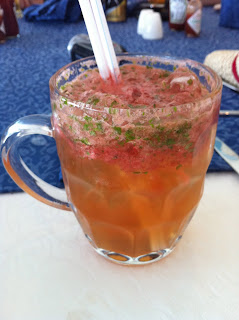 Good shit, y'all. Then it was off to Muttrah, stopping off on the way to see a giant incense burner in a park, that also contained one awesome play area. 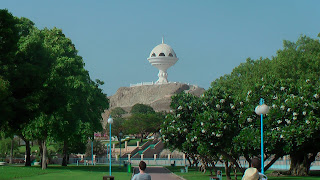 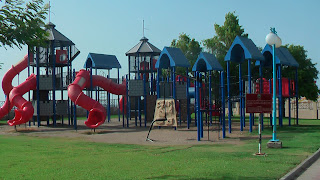 Man, if they filled that burner with weed the whole city would have a good time. But the place was empty, the attached awesome looking fairground was closed and the slides burnt my bum. So off I went, wishing we had parks like this at home.
Our final destination was the Muttrah market, or Souk, situated by the coast where the Sultan's yacht is moored.
The Souk is under cover, a welcome change to the scorching heat we'd had all day. Incense was burning everywhere, and guys were pushing their wares in our faces the whole way through. Pretty easy to barter down the price if you want something though, and not bad prices either. It was a great way to soak up the atmosphere, and everyone from stall owners to customers were really friendly. It was all very chilled. 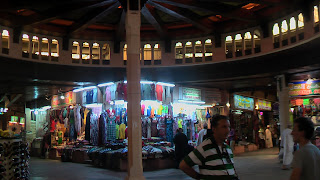 But then of course it was time for another drink, because I don't know how people live in this heat and don't spend half their income on drinks. And what better way to top off the day than with this monstrosity? 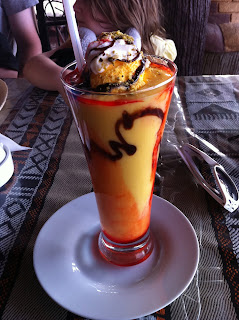 Oh yeah, mango milkshake topped with mango ice cream and pistachio. It tasted like a Solero. So all in all a good day, and tomorrow may be even better. Stay tuned.
My rating: 4/5
Posted by Dan Bishop at 09:26