Our vacuum cleaner started sucking earlier on this year. That was a poor choice of words concerning a vacuum cleaner. Let's just say it started to not work so good. While scouring Best Buy for a reasonably priced new one I mulled over a handheld vacuum for an instant, before I realised that they were about £70 and only lasted for about 15 minutes on a full charge. So I bought quite a small funky vacuum for £35 instead, and it's pretty awesome.

But still, handheld vacuum cleaners. That just sounds awesome. It's mankind's dream to take things that were previously massive and fit them in your hand. So the idea always stuck in the back of my mind, but only in the same capacity as the idea of a Roomba did. A vague dream for a time when I'd have ridiculous amounts of money to spend on things I didn't need. Until today.

On my usual charity shop run on my way to town I was confronted with the Ergorapido, labelled at £4.99. I thought it was too good to be true, as I looked at it to make sure there was no loose wiring that would inevitably kill me. But pressing the button, it whirred at me. And since the person who gave it away had forgotten to empty it out, some crumbs had fallen on the shelf and I managed to suck them up. It didn't sound too powerful, but I guessed it wasn't at full charge. So off I trotted with my wonderful bargain. 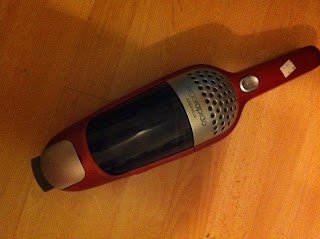 Looks pretty sexy, don't it? I thought so, though I kept the price tag on in case it explodes in my face in the next week or so. My previous thoughts about owning a handheld vacuum were due to the space restrictions of my flat. I figured that dragging one of these around the floor every once in a while would keep the floors clean and give me much needed storage space. Until I remembered that I have two children and every time they eat anything there will be some dropped on the floor. I can't wait for the age when my kids can coordinate chunks of food with the size of their pie holes. Though I must admit sometimes I fail to do so.
But anyway, at £4.99 I couldn't resist. We have an Ikea sofa with a cover that we've taken off and washed so many times the velcro is no longer very effective. So any time I go over it with my big manly vacuum cleaner that cover gets sucked up and I can't move the nozzle about. But no longer, for now I have the Ergorapido. It glides along most service, as the nozzle is quite soft and rubbery. It's pretty powerful at full charge too, and does a very good job of sucking up crumbs and small bits of food. It's especially good on my sofa, as it glides along the cover, only sucking up what shouldn't be there. And thanks to its handy little charger, I can now have it at the ready whenever my children eat, holding it up to their faces to catch any crumbs at their point of origin.
There is a small problem with the charger though. 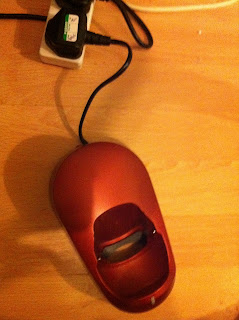 Look at the cable. That has to be the smallest cable I've ever seen. I don't know how anyone could think that would be long enough. If I plug it into my wall socket the base won't even touch the floor. So I have to put it on the floor, right next to the extension sockets. That's pretty lame. For all the good things I can say about the vacuum cleaner it's annoying that the charger is so shit at being useful.
So, if you're looking for a handheld vacuum cleaner, I wouldn't recommend buying one for a lot of money. That may be because I haven't got a lot of money, but it's also because I don't have a car or a pet, and this would be very handy for clearing up car and pet related mess. If you can find one of these for a fiver, go for it, I know I don't regret it.
My rating: 4/5
Posted by Dan Bishop at 15:50