Today's Review: Poundland Spoon It Out 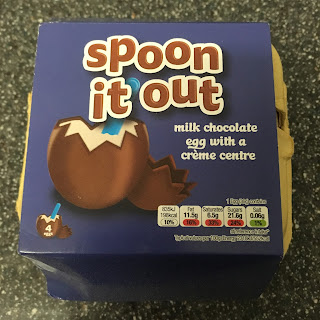 Poundland have made a thing lately of stocking off brand alternatives to the big chocolate names, even though you can get the real thing for the same price elsewhere most of the time. Not so much with this one though, it's a knock off version of Cadbury's Egg 'N' Spoon, which are normally £2 when on offer. This one is only a pound though! It's based on the same premise, so what could go wrong?

The answer is everything. First of all, it only comes with one spoon, so I assume Poundland are judging me to be some kind of greedy person who eats four eggs in one sitting. I mean, in my case they're right, but I'm sure not everyone is like that. Besides, I don't want to eat all these in one sitting, because they're disgusting. Underneath the cheap chocolate layer is the "creme centre", which, while packed in right to the top, is pretty much impossible to scoop out. It's hard, and you can feel the grittiness as soon as you dig the spoon in. The stuff is less creme than buttercream, and it's not a very well made buttercream at all. It's like it's been made by someone whose solution to every problem is to throw butter at it. The insides of these eggs taste like slightly sugary butter. I don't think I need to say more than that to convince you not to eat them. Even if you're a butter fanatic, I still don't think you'd get enjoyment out of these gritty, buttery, cheap chocolate eggs. They're gross. Just spend a bit more money and get the Cadbury ones. Please.