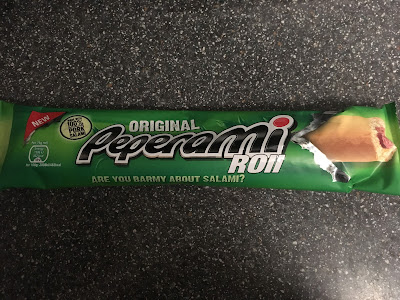 Peperami is one of those classic snacks, for those times when all you really need is a stick of salami. But what if you want something more, like some carbs on top of your protein? Well, your prayers have been answered, in the form of this Peperami Roll. It's a Peperami, but in a roll. That's it, really. Like a sausage roll, but with salami. Also, the "roll" bit isn't pastry, but bread.

Sound nice? No? I didn't have high hopes for this from the start. I mean, it looked a bit like a corn dog on the packet, but I knew it couldn't be anywhere near that good. Turns out I was right. There's nothing wrong with the Peperami itself, it's the same classic stuff. Not that a Peperami is one of my all time favourite snacks, but it's a nice, slightly spicy salami stick. As for the bread though, that's just not nice. It's dry, hard, and not at all flavoursome. I don't get it, if they were trying to emulate a sausage roll, why not go for pastry? It can't be that hard to get right, but instead they've opted for this almost stale tasting bread coating. Not nice, stick with what you know, guys.