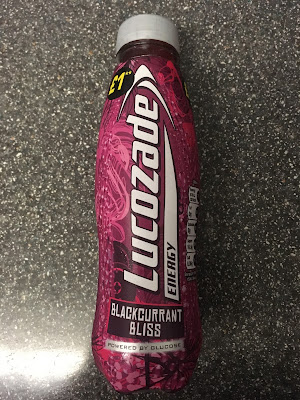 Another new Lucozade flavour in as many days. I was hoping this one would be better than the Lucozade Zero Original, but that wouldn't be too hard in my opinion, and just look, it's blackcurrant, what could go wrong? Apparently this was a thing a while back, but was discontinued. I think I vaguely remember a blackcurrant Lucozade, but that must have been before my reviewing days, so I'll take this as its own new flavour.

So yeah, a blackcurrant Lucozade, that's pretty much it. There's 2% blackcurrant juice in there, which is nice to see, and I must say it gives it quite a natural taste. It's a pretty sweet, refreshing drink. It tastes like blackcurrant, I'm not sure what more you could want. I'd say it's reminiscent of Ribena in flavour, although it's not quite as clean and crisp, the glucose gives it that slight syrupy texture that makes it a little heavy, but it's a damn good effort at another fruity flavour. I'm not sure how long this will be around, but you should probably hunt it down while you can. Apparently there's a pineapple flavour surfacing too, so I'll definitely be on the lookout for that one.