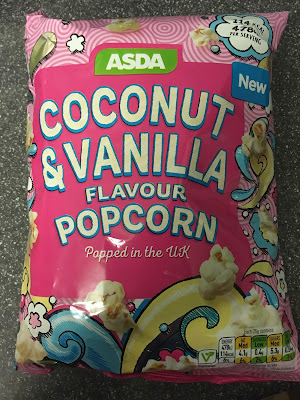 Just when I thought the fancy popcorn fad was coming to an end, Asda have brought out this delightfully sweet sounding flavour. I'm not sure I've had coconut popcorn before, especially as I only just recently started to like coconut, so I was pretty excited about how this would turn out. Even if the coconut didn't work out, I'd be able to rely on the vanilla, right?

This stuff is fairly coconutty. It's a nice, sweet, bold flavour, that is a pretty good fit with the popcorn. The flavouring, however, has a bit of an odd texture, lending a sort of chalkiness to the kernels that hangs around after eating. It detracts from the coconut flavour a bit, but thankfully there's a nice undertone of vanilla that provides a mellow sweetness, and in the end it works out pretty well. The texture didn't ruin this as much as I thought it would, and underneath there are some good quality kernels with a satisfying crunch. A unique popcorn flavour that can be picked up for a pretty reasonable price.