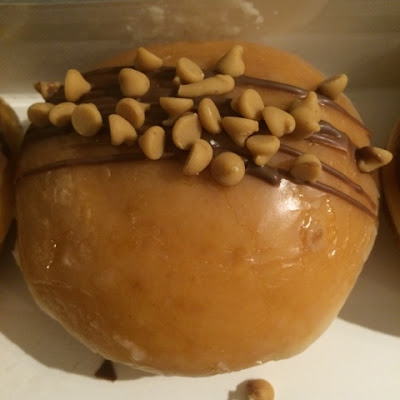 What with the excitement surrounding the new Nutella filled Krispy Kreme doughnut, this one was in danger of passing under my radar, but thankfully I caught wind of it. It's a peanut butter and jelly doughnut! For all the peanut butter products being released over here, I'm surprised I can only get hold of PB&J in import jar form. But now Krispy Kreme have me covered, and it looks magnificent. 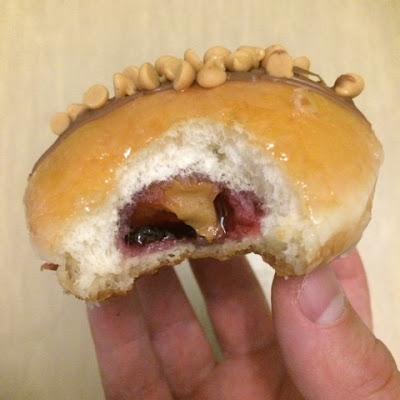 Look at the mixture inside, it's great. Reese's peanut butter and raspberry jam, together as God intended. There's a chocolate drizzle on top, complete with Reese's peanut butter drops. I'll tell you right now this is a very peanut buttery doughnut, but that shouldn't be a problem for you if you picked it up, this is one for the peanut butter lovers. I'll say there's perhaps a little too much peanut butter, it does overwhelm the jam in some places, but mostly it's a good combination of the two fillings that tastes just like the good stuff. The topping, while looking and tasting awesome, does shift the balance more in favour of the peanut butter element, so maybe it's not too necessary an addition. Still, this doughnut is great, and I hope it's the start of more PB&J foodstuffs coming to our shores. Krispy Kreme, I'm a huge fan.