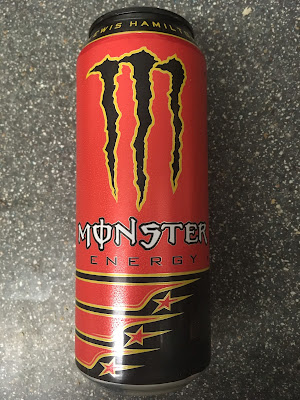 Rejoice, another new Monster flavour has emerged! Looks like this one is following in the footsteps of "The Doctor", but this time instead of collaborating with a MotoGP star, they've gone with Lewis Hamilton. So here we have "LH44", which is as cryptic as the other one, but the internet assures me that this is a black grape flavour. Now, the lemon Doctor still remains one of my favourite flavours, so I was excited to see what this one would bring.

I'm disappointed, I have to say. Grape is a tricky flavour to nail, I know, as evidenced by all those grape drinks and sweets that don't really taste like grapes at all. Still, they have that certain sweet grape flavour that I've come to appreciate on its own. This can pretty much tastes like that. Unfortunately, while it can work in some sweets, in drink form I normally find it too sweet, and that's the case here. The drink itself isn't too thick or syrupy, so I appreciate that, but the overall flavour is a little sickly, and it's slightly darker than I'm used to, probably to be more in line with a black grape taste. This certainly isn't a bad can of energy drink, but I know Monster can do a lot better. Still, it's cleaner tasting than a lot of stuff Rockstar have put out, so I'd say it's worth a shot.