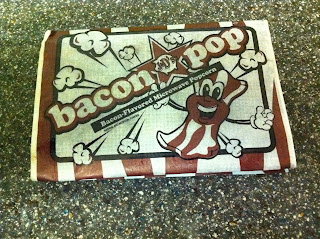 I found my last packet of bacon popcorn while going through the cupboards the other day. I got some at Christmas, and the other two packs were consumed long before I started reviewing. But it was as good a time as ever to stick this baby in my microwave and chow down on some bacon goodness.

"Bacon popcorn? How absurd!", I hear you cry, but you're forgetting that everything is better with bacon, because that's the American way. You can tell this is an American product because it has some of that weird, streaky, thin rectangular bacon you see in the States, and not the good rounded chunky stuff you get over here. You also know it's American because it's bacon popcorn. Anyway, the guys who made bacon popcorn have also created bacon salt and Baconnaise, so this is probably made with some loving bacon experience. So into the microwave it went. 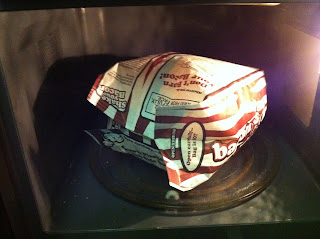 Oooh yeah, nothing like a big inflated bag of freshly popped corn, with steam still rising from the openings. Unless that steam is actually black smoke. Thankfully mine wasn't. So after opening the bag and leaving it to cool for a little while, I was confronted by the innards. 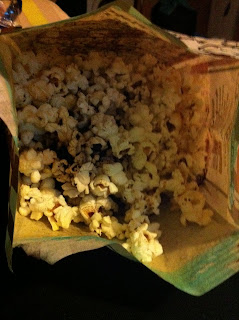 A little burnt, but still good. How does it taste? Not amazing. Come on, it's bacon popcorn, what do you expect? It's pretty much like salted popcorn, except a whole lot more salty, and with a interesting taste to it. I wouldn't call it bacony, it's kind of a smokey meaty flavour. A little bit of a burnt flavour. Perhaps with all the bacon related words and imagery they plant all over the bag your mind will lead you to think that's just what bacon tastes like, but it's certainly unlike any bacon I've tasted.

So sorry, bacon popcorn. You certainly aren't a terrible popcorn, but you aren't a great bacon product. Perhaps I shall go on the hunt for something else promising me bacon where bacon should not be.