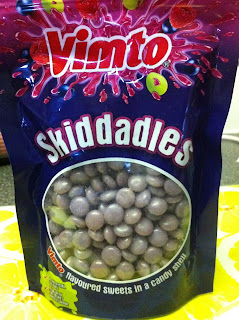 I don't know why Vimto seem so intent on capturing their drink in sweet form, but so far they haven't done a bad job. The chews were pretty good, and the Vimto bonbons are amazing. But Poundland don't seem to have the bonbons anymore, they have these weird things instead.

It's an obvious attempt at becoming Skittles. Just read the name. But they're not Skittles, and Skittles should not be encroached upon because they in themselves are awesome, as are their adverts. Skiddadles are only one flavour, that being Vimto, which seems to be an amalgamation of several different fruits. These aren't bad. They're a lot smaller than Skittles, and they pretty much taste the same as the bonbons. Skiddadles leave a slightly chalky texture after eating, and their tiny size force me to eat many in one mouthful, and that makes me feel like a greedy giant.

So yeah, they're not bad. In the absence of other Vimto sweets I'd like them a lot more, but having the bonbons as alternatives makes me long for them somewhat. But it's a good attempt at Vimto broadening out to (cashing in on) various forms of sweety goodness.