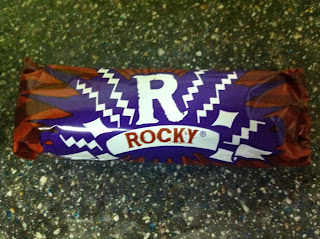 How odd. With Club biscuits rolling out their limited honeycomb flavour, I guess it was up to rival biscuit Rocky to roll out a flavour too. But apparently they couldn't come out with honeycomb, or raisin or something. No, they brought out a fizzy cola flavour.

It tastes like you'd probably expect, like if someone spilled some cheap Cola all over a chocolate biscuit, which I can only assume is how someone came up with the idea. It certainly is a weird taste, perhaps a little too strong on the cola. While it certainly mellows out to a tangy chocolatey taste, the cola is overwhelming on the first bite. While it's not the most awful biscuit in the world, it's just a weird idea, and it's certainly a weird taste. Think I'll stick with the regular flavour next time.