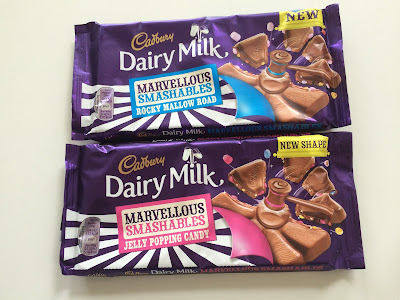 Cadbury recently sent me a couple of their new bars. Well, I say new, but it's more of a new format/shape than a new flavour. I know Rocky Mallow Road is relatively new though, so I suppose it's a bit too soon to be asking for something revolutionary. These are Marvellous Smashables. They're like Marvellous Creations, but you can smash 'em. Now, I'm certainly not adverse to smashing down on a chocolate bar, Terry's based their whole flagship product around that premise. The new shape is designed to promote sharing amongst friends and family. Simply flip the bar, smash it and let everyone have at it. Unfortunately, it seems Royal Mail wanted to take the fun away from me, as my bars arrived slightly pre-smashed. 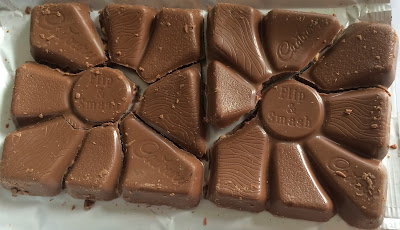 Obviously I couldn't experience the full smashing joy that I was expecting, but through the power of Paint I've managed to ascertain the focal point and progression of the smashing. 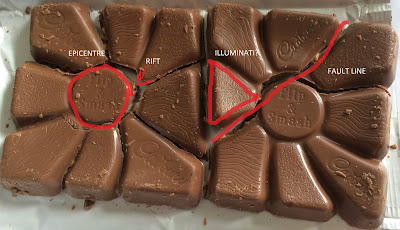 Needless to say I was slightly disappointed, but as you can see, the bottom right portion of the bar remained intact, so I flipped that sucker over and punched it right in the back of its face. Surely enough, the pieces were torn asunder, and I can't say I didn't feel a twinge of delight. Does that mean I'm a secretly violent person? Possibly. But I also like chocolate, so I'll chalk it up to that.

Aside from the different shape and the smashing element, there's not all that much different about these bars. They're the same flavours as the Marvellous Creations, which isn't a bad thing per se, but I have previously expressed my opinion on these two flavours in the past, and not found them particularly to my liking. However, I must admit that the Rocky Mallow Road is certainly better than I thought last time. Perhaps it's because initially I had the smaller bar, and the pieces packed inside were just too much, leading to an imbalance between filling and chocolate. This bigger bar seems much more spaced out, with an even distribution of marshmallow, shortcake and jelly pieces. I certainly didn't have the problem of too much jelly, and thoroughly enjoyed that bar. As for the Jelly Popping Candy, it was alright, still a bit too chewy for my liking, but the popping candy is always a nice addition, and the people I was sharing it with certainly enjoyed it. See? I was getting into the spirit of the whole endeavour.

When I first saw these bars, I wasn't too convinced that they were a good addition to the Cadbury line up. It's just a new shape after all, and you don't even get that funky looking chocolate hammer to smash the bar with. But hey, it's the same bar, the same size, just with a little added element of fun. I mean, you may be able to smash the regular bars to pieces, but they're not specifically designed for that purpose, while these are. I don't think I'd go as far as the PR guys did and say it can be used as a "fun family game" on a Saturday night. I mean, look at the uneven size of the pieces. That could turn sour pretty quickly. But these bars incorporate a neat idea, and certainly don't detract anything away from the original flavours.

As I said before, I prefer Marvellous Creations in their bigger sizes, and these were tasty, though the flavours I received certainly weren't my favourite. It doesn't seem like there's a Cookie Nut Crunch version, so they should probably get onto that. I was expecting to give a pretty average review of these bars, but the novelty of the smashing did rub off on me, and I'd probably pick a Smashables up over a regular Marvellous Creations bar just for that purpose. So give these a go, you might have a smashing time. I'm sorry, that was terrible.