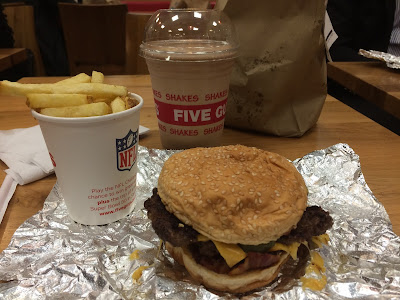 During my quick trip to London last week I managed to squeeze in a visit to Five Guys in Covent Garden. I'd been meaning to go there for a while, but every time I pass by on a weekend the queue is out of the door, and thankfully on a Wednesday evening it was far shorter. Five Guys is an Americna burger joint, quite simply, and a pretty expensive one at that. That meal up there cost me just over £16, and that's a small fries. But hey, it doesn't matter how expensive it is if it tastes great, right? Well, it does to a point, but does Five Guys surpass it?

Let's start with the fries. Sure, that's a small cup, but the guys behind the counter (there are more than five, unfortunately) shovel a good few more into the bag before serving up. This isn't your standard stray fallen fries that you'd find at Burger King or KFC, it's a small tray full of fries piled on top for good measure. As for the taste, man these fries are good. They're made from English sourced potatoes, roughly chopped and skin on, and fried in peanut oil. The nuttiness shows in the end result, not obnoxiously so, but certainly a nice hint. They're also pretty heavily salted, perhaps a little too much for my liking, but they certainly weren't unpleasant. They're crispy and delicious, and great with a bit of ketchup for dipping.

The burger was the main event, and for almost £9 it had better be. I went for the bacon cheeseburger, because who wouldn't? One of the great things about Five Guys is that any and all burger toppings are free, and there are a lot to choose from. Onions, pickles, mustard, ketchup, jalapeños, mushrooms to name a few, you can stick whatever you like on there. I was going to go for some twisted, spicy concoction, but figured I'd get a better taste of the burger itself if I went for a modest onions, pickles and ketchup. I've gotta say, this burger was awesome. The patty was thick and juicy, like a flame grilled Burger King cranked up to 11. The bacon, in contrast, is tougher and crispy, and provides a lovely change in texture that really accentuates the moistness of the burger. The bun is a classic sesame seeded affair, but really it's just there to shovel in the glorious meat and cheese. I went in wondering how good this burger could be, and came out knowing that it was actually pretty amazing. Worth £9? I don't know, but certainly nearing that amount.

Finally, the shake. This is also a choose your own adventure, you can mix in any flavour for free, which is good as the shake itself is almost £4. There's a very nice selection, from chocolate and vanilla to coffee and peanut butter, you can even put bacon in there. If you wanted you could have a mix of every single flavour there is, but I'm sure that would be attempted genocide on your taste buds. Since I was going all American, I figured I'd go for a chocolate peanut butter shake, and oh man was it glorious. It's a lovely thick, creamy shake, and both the chocolate and peanut butter flavours were at the forefront throughout, working perfectly with each other rather than struggling for dominance. I wasn't sold on a £4 shake when I walked in, I only settled on getting one as I was ordering, but I'm glad I did.

So yeah, Five Guys is a damn good burger place. It's still pretty damn expensive, I won't be going again for a while, but I will return, and I'll be shoving more of those glorious burgers and shakes into my face. Also some hopefully slightly less salty fries. If you fancy some fast food and have a bit of extra cash burning a hole in your pocket, check Five Guys out.