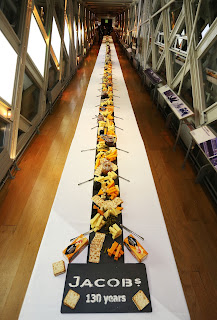 I was invited to the walkway over Tower Bridge last night for a pretty interesting event. It's Jacob's 130th birthday, and to celebrate the occasion they laid on a cheeseboard. Not just any cheeseboard though, this one was 40m long. Jacob's hopes to improve the British public's knowledge of cheese, as the average person can only name four varieties out of 700 British cheeses. 40m of cheese is a splendid sight indeed, but where there's cheese, you'll also probably want a good cracker, and what better crackers than Jacob's? 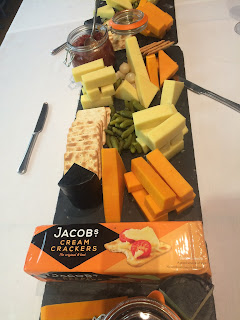 You can't beat a good cream cracker, and Jacob's are the original and the best. A modestly sized, crunchy cracker that packs a nice flavour on its own, but works especially well piled with cheese and chutney. Red Leicester and cheddar were the recommended toppings for these originals, and you can't go wrong with that. Jacob's Cream Crackers are nice and light, and give way very nicely to the flavours of whatever you put on top. Simply a classic. 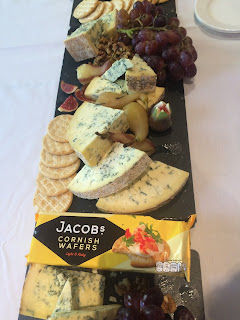 I then wandered into stinky territory. I know many people who aren't, but I'm a big fan of blue cheese, so I was carving up those bad boys in no time. I'd probably normally stick my blue cheese on a regular cracker, but since the Cornish Wafers were laid out around these wheels I figured I'd give them a try, and it turns out they're a much better fit. They're slightly blander than the crackers, and significantly softer, so they really blend in well with the texture of the cheese itself and allow the fantastically bold flavour to come through. I can't say I've paid attention to the Cornish Wafers before, but I think I'll be picking some up in future. 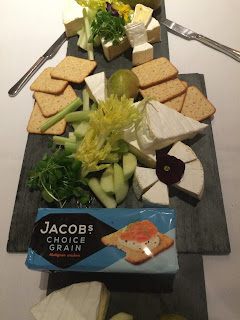 You can't beat a bit of Brie, and apparently you can't beat a bit of Brie on a Choice Grain cracker. These crackers are a multi-grain option, and they're definitely a favourite of mine. They have a fuller texture, and a slightly sweeter taste, providing a lovely crunch to go with the soft Brie on top. I always figured Brie and grapes went together, but since there were pears laid out around this section, I gave it a go, and was pleasantly surprised. You could probably stick any fruit with Brie and it would all be good, but I must say the Choice Grain is a great choice of cracker to put it all on top of. 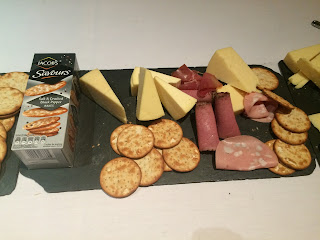 I finally reached the end of the table, where the savoury section greeted me with a nice selection of cured meats. Here were cheeses like Parmesan and Caerphilly, all packing great bold flavours. Paired with these was another cracker variety I hadn't yet tried, Savours with salt and cracked black pepper. It makes sense, a savoury cheeseboard requires a savoury cracker, and these ones fit the bill. They're small and very crunchy, and the salt and pepper work wonderfully with the saltiness of the cured meats, with the bold cheese really rounding off the flavour for an overall delicious loaded savoury cracker.