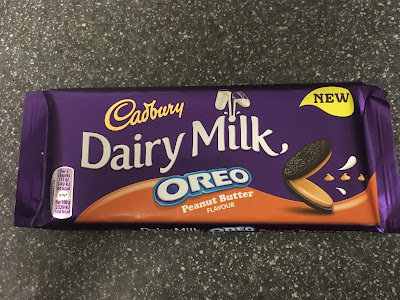 We've had Dairy Milk Oreo, based on the regular old Oreo, but since then the UK market has seen the arrival of a few new Oreo flavours, and it seems the chocolate bars are following suit. You can now get Dairy Milk in both mint and peanut butter flavours, and of course I was more excited about the latter, so it's the first one I'm going to review. I wasn't a massive fan of the biscuits themselves, but I had faith there'd be more to this chocolate creation.

This is pretty much the same as the regular Oreo Dairy Milk, the filling consists of Oreo biscuit pieces and creme, except this time the creme is peanut butter flavour. The one thing I wasn't fond of in thge biscuit was the lacklustre flavouring, and this one goes some way to solving that issue, but not completely. It's a very creamy filling, and the flavour is bold, but it seems to be more buttery than peanutty. The overall taste is there, and it's pretty good, but the levels are a little bit off. The rest of the bar is pretty great, the chocolate and Oreo chunks are as good as always, and while I wasn't a massive fan of the peanut concoction in the middle at first, I did get used to it as I went on. This is a good attempt at a new Dairy Milk bar, and it's probably the closest we'll get to a peanut butter offering from Cadbury for a while. I know they can do better, but this is a good start.