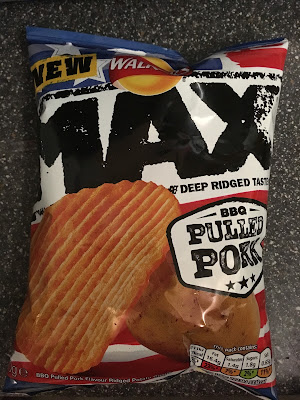 I regularly forget that Max crisps exist, they were a big thing when they were brought out years ago, but I can go for years at a time without giving them a thought. But now they've brought out a new pulled pork flavour, so when I caught the packet in the corner of my eye at the petrol station, I had to grab a bag. I've long stated I'm not a massive fan of meat flavoured crisps, but they're always worth a try, right?

I wasn't particularly impressed with the first few crisps. There was a certain meatiness to them, but I wouldn't say it fit the BBQ description. That changed as I made my way through the rest of the bag though, a distinct BBQ sauce taste crept up, and by the end it was a prominent flavour, a smokey, slightly sticky seeming goodness, underneath which the meat flavour was still present. I can't say it perfectly encapsulates that pulled pork taste, but the flavourings all work together nicely to give a somewhat authentic experience. These are some good meaty BBQ crisps, some that I wouldn't mind picking up again.