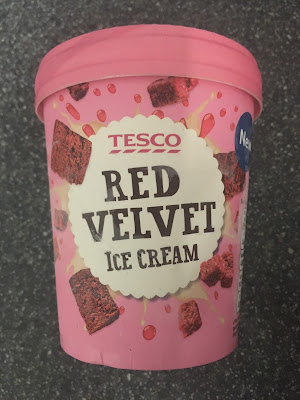 What with being caught up in all the Ben & Jerry's and Haägen Dazs flavours over the years, I seem to have neglected the less premium ice creams, and Tesco have come up with some interesting concoctions. This one especially caught my eye, a red velvet ice cream. It consists of pink and white cheese flavoured ice cream, a cream cheese sauce swirl and pieces of red velvet cake.

Sounded pretty cheesy to me, but in reality it's not particularly so. The ice cream has a sort of moussey texture, which isn't too bad, just different I guess. It's still nice and creamy, it's just the flavouring isn't quite there. The cream cheese sauce goes some way towards it though. As for the cake pieces, they're plentiful, and they're pretty nice and soft. It's not the best quality red velvet, but it does a decent job of saving a pretty bland ice cream. All in all, this isn't fantastic, but it's definitely a different flavour of ice cream that pulled off fairly well.