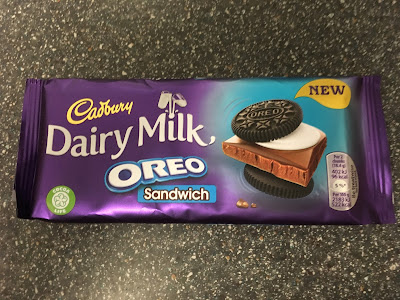 Not content with having two Oreo themed chocolate bars, Cadbury have brought out another two products featuring the now omnipresent biscuit. Here we have the Oreo sandwich bar, which is like the regular Oreo bar, but inside out. Well, it's not quite that simple, but that was my first impression. Here we have squares of Dairy Milk chocolate, with a mini Oreo on either side, and some of that wonderful creme in between. 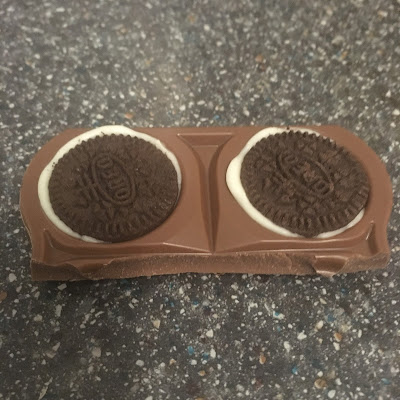 Well, it looks pretty good, it's nice to see a Dairy Milk bar with a substantial bit of biscuit, even though it seems a pretty transparent way to use less chocolate. The Oreo is a predominant flavour here, with a nice thick bit of Dairy Milk in between, making for a nice creamy, chocolate biscuit bar. Whereas I can't particularly taste the Oreo biscuit in amongst the creme in the regular Oreo bar, it seems the opposite here. The creme is laid on pretty thin, and is only on one side, so it doesn't really show in the overall flavour. With more of the white stuff, this could perhaps overtake the Oreo filled bar, there's definitely more chocolate overall. As it is, it's not perfect, but a decent variation on the Oreo bar.