Meat. What is your response to that statement? If it's anything other than "Yumz" then you are wrong. Meat is good. Tonight I ate meat. But to just eat a hunk of meat would be barbaric, so I smooshed the meat up into patties. That's what you call a burger.

Tonight's menu consisted of four burgers. I slapped them around as best I could to get them even, but in the end I didn't really care. This isn't Masterchef, it's Meaterchef. Four plain burgers ain't good though, so I added some extras. 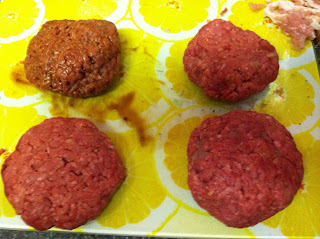 On the top left we have meat infused with Jack Daniel's barbeque sauce. 'Cause why have sauce on top of your burger when you can have it inside? Under that is meat with a small block of cheddar. 'Cause why have cheese on top of your burger when you can have it inside? Right of that we have the bacon burger, 'cause why have bacon on top.... You get the picture. The top right has Nando's hot Peri Peri spices inside. I was going to be disgusting and do a peanut butter burger, but I forgot to buy peanut butter.
After much meat slapping, and making some burgers (ha, I made an innuendo and a poor food hygiene reference), under the grill they went. That's the beauty of making burgers. It's quite simple. It appeals to our very human urge to squeeze things into smaller things and then eat them. At least, I assume everyone has that urge. 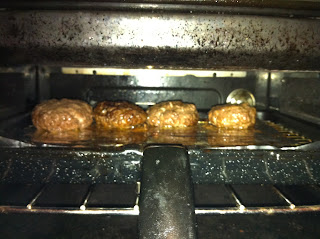 Here they are cooking. I put some foil down because that's the sensible way to grill. There is a danger of the grease that leaks out catching fire if you cook for too long, but that just creates a funny story to tell later. Speaking of which, did I tell you about that time I had to carry a flaming grill to the kitchen sink to put out the fire? That shit was hilarious.
Soon, they were cooked. So I ate them. First I pu them on a plate, and put a couple in some buns. I probably should've added some fries for some variety, but I was too wound up in a meat frenzy to remember to cook them. So it was just me and the meat.
The spicy burger was okay. I prefer the ones I normally make that have a whole crushed ghost chilli, although they tend to make my mouth hurt with searing pain. 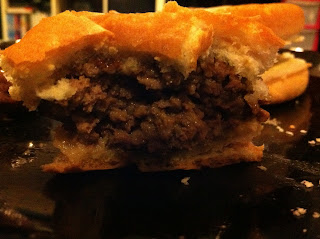 There's the barbeque burger. Looks quite professional in the picture, apparently I take pictures good. What turned out to be a massive dollop of sauce in the preparation stages didn't turn out to be too bad. It was smokey, and not too sloppy. But after the halfway point, shit got real. 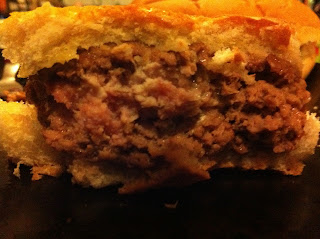 The bacon burger. This picture looks even more awesome than the last. Look at it. It's a meat beast. The only apparent purpose of the bun is to be able to hold it without getting grease on your hands. And that's what bread's purpose should be. In my opinion, the only thing better than meat is more meat to go with the first lot of meat. This burger was meaty, and everything's better with bacon. 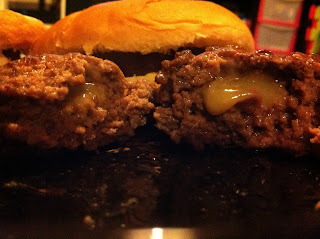 Finally, my masterpiece. This is the burger I revisit every time I make them. Just get a block of cheese, wrap it in meat, cook it lap up the results. Cheese goes with even more stuff than bacon goes with. Without cheese we would merely be carnivorous animals. This burger is a delight to eat. First you get the juicy meaty flavour, and suddenly it's topped off with the ultimate combo maker of warm melted cheese. It makes me feel happy inside.
Burgers are good for the soul. They fill it with meat and joy. My burgers, while not of amazing quality, are good enough for a cheap meal. Just try it. Toss in some cheese, some sauces, garlic, even peanut butter (seriously, peanut butter burgers are pretty damn nice), slap some patties and grill up a good time.
My rating: 4/5
Posted by Dan Bishop at 13:30