Tonight I had the pleasure of indulging in the height of the haute cuisine of the child world. My experiences were at once exciting and delightful. My foody nature has often led me into undiscovered avenues of culinary pleasure, and tonight was certainly no exception. 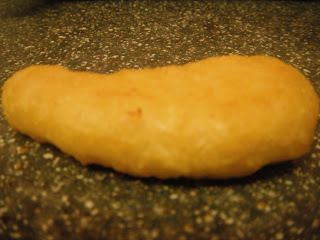 The Birdseye chicken dipper promises 100% whole chicken breast in a golden and crunchy batter coating. At first glance it is abundantly clear that this food was elegantly designed in the shape pertaining directly to its name. Indeed, what is a chicken dipper without its ability to dip? The smaller end creates an easily graspable point at which to lift the dipper and delve it directly into the depths of your favourite condiment. Normally in this scenario I would opt for a light vinaigrette, but to fully endorse myself into the culture I went with the "vogue" sauce of the moment, tomato ketchup. As a side to the main meal, I chose a spread of thinly sliced and lightly fried potato, supplied with the utmost care and passion by the illustrious McCain company.

A wise choice indeed. I have heard rumours of chicken dippers being served with stewed haricot beans steeped in a tomato sauce, but everything in moderation I say. Too much tomato can be extremely unforgiving on the palate. The "French fries" were not among the best i've tasted, the separate ventures of the upstanding Colonel Sanders and Ronaldo of the McDonald estate are simply far ahead of any competition. But in this case, the McCain fry was a perfect accompaniment to the dipper, which in itself was not without its faults. The creator of the dippers, a noble sea captain who has lent his name to the franchise, seems to be leading a rich lifestyle afforded to him by the immense popularity of his dish in the under 10s market.

At first glance it is clear that there is far from 100% chicken breast in this dish. Indeed, upon examining the recipe I found in fact that chicken constituted only 50%, while the rest was the various flavourings and breadcrumbs that constituted the batter. This ratio is a transgression in my eyes, but the batter itself lends a certain je ne sais quoi to the proceedings. The dipper is crunchy, slightly greasy, but eternally satisfying once it gives way to the juicy chicken treasure inside. In keeping with the traditional method of consumption, I forwent cutlery and delved straight in with my hands for full on digital pleasure. The grease was constricting at first, but I found my plate to be empty in no time at all. One may ask where on a chicken are its dippers, but I say that they are philistines, and are clearly ignoring the centuries of culture and tradition surrounding this dish.
My rating: 4/5
Posted by Dan Bishop at 09:08