One day, a man was writing, once again, on the floor. Or in his lap. I can't remember which. At some point during his work he thought "Hey, wouldn't it be cool to put my apparatus on a surface that's the same height as my chair and cut out all this tomfoolery?" Then he made a table. That's a true story. Also it might have been a woman.

I've done the calculations, and have concluded that without the invention of the table we'd still be living in mud huts, hunting deer and dying of smallpox and the black death. Tables are everywhere, and considering the disposability of objects nowadays, it's a true testament to the wonder of the table that it hasn't been rendered obsolete by some new object holding technology. In fact, when new technology is made, it's normally on top of a table.

I'm sure i'm not the only person who gets excited every time they buy a table. My last table purchase was no different, except that it's from IKEA, which seems to excite people even more because they apparently have a fetish for cheap Swedish furniture.

This is the LACK side table. It has four legs with a sturdy flat top. It is certainly a table, in a simple yet elegant form. I'm not sure why everything in IKEA is spelt with capital letters, but I assume it's so you can make your own acronyms. Also, i'm not sure why this is firmly stated to be a "side table". In my experience it can not only be placed to the side of things, but also in front, behind and under things. Also, I guess, on top of things, if you're some kind of sick table stacking pervert.
The "Look, After Coffee, Karate!" table from "I Know, Everything's Awesome", comes in a variety of different colours, but we chose black because we're cool. Originally it was bought as a coffee table of sorts, although we rarely drink coffee or tea. Yet this table has turned out to have a large variety of uses. It's had so many things on top of it it probably feels like a cheap prostitute. After a while I felt sorry for it, and like Richard Gere in Pretty Woman, I took it out of harm's way and lavished it with gifts. 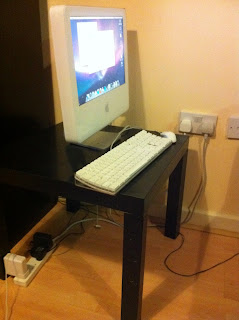 The table currently resides in the small cubbyhole between the sofa and the bookcase, supporting an iMac G5. It fits in quite nicely, and makes no obtrusive noise, which has been a problem with tables in the past. There's even space behind the computer, so the possibilities for extra support are near endless, except they're confined to that fixed amount of space. The four legs show no signs of buckling, and while there are slight signs of chipping on the surface, hull integrity remains intact. I have nothing but good things to say about the LACK table, it's everything a table should be, and more. Wait, not more, it's just a table.
My rating: