We decided to order Pizza Hut tonight. Who doesn't like Pizza Hut? The people who like Domino's I guess. But to each their own, and with Pizza Hut's near constant supply of "50% off £30" vouchers it's hard to say no. But imagine my joy when I opened up the website to find not one, but two special new items on the menu.


The first was the "Texan BBQ Pizza", tempting me with a BBQ sauce base, chicken and crispy bacon. "Yumz!" my taste buds cried, before my brain took over and assured me that I could get two more toppings on top for the same price if I took the extra effort to create my own pizza. So I took the manly option and replaced the chicken with steak (Fact: Steak is a manlier meat than chicken will ever be), and added some jalapenos, 'cause i'm hardcore.


The second new and wondrous delight was the Rocky Road dessert."Warm gooey chocolate brownie, topped with melted chocolate sauce, cookie biscuit pieces, marshmallow and glace cherries". And the picture looked like this: 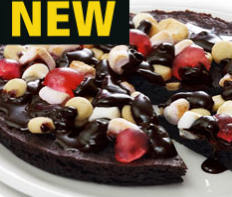 Now who could resist that? Look at all the stuff on top of it. It's so good that someone even cut out a slice and ate it before they could take a picture. My tastebuds tingled with anticipation. My stomach rumbled with glorious expectation. My brain was busy thinking up all these phrases I could use later. But finally, it arrived.


The pizza was awesome. Normally I go for a cocktail of pure meat and stuffed crust in order to assert my masculinity, but my balanced approach this time rewarded me with noms of the highest order. The dessert was stored in the microwave while the pizza slaughter ensued, 'cause apparently that keeps things warm, although i've never checked the scientific validity of that claim. But soon, it was time to break that sucker out. This is what I got: 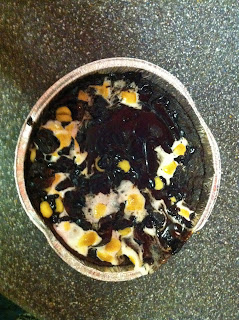 Hmm. There appears to be a slight inconsistency between the two pictures. Where's the cornucopia of colours? I don't see no marshmallows nor cherries. It's round, like in the picture, i'll give it that, but only when it's in the packaging. I attest that it's physically impossible to get it onto a plate and keep it round, because the entire thing slops out at the slightest angle. But no matter. As they say, "Slop can be sublime!" (No one says that, but they will now, just watch.) Here's how it looked with my best presentation skills, complete with the vanilla ice cream they graciously give you for 50p extra: 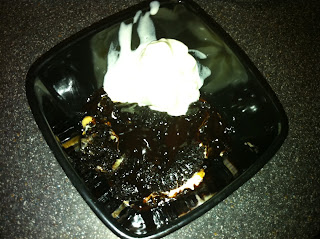 I had to use the flash so you could actually tell the slop and the bowl apart. Looks appetising doesn't it? Hey, you're right, it doesn't. But hey, it's chocolatey, it's in a bowl. I can't not eat it.
The first mouthful confirmed why it slopped so much. Instead of being "warm gooey chocolate brownie, topped with melted chocolate sauce", it was in fact chocolate sauce. With some lumps in it. I could taste a couple of cherries, maybe a touch of brownie, but the sweet hint of marshmallow never once crossed my taste buds through this ordeal. Yes, I said it, eating this was an ordeal. I couldn't finish it, and those who know me know who strange that is, 'cause I always finish what's on my plate. I even gave some to the kids. They seemed to enjoy it, but I assume that's because they're so young and naïve.
So there we have it. Please don't eat this. It's not nice. It's less "Rocky Road", more "Road That Hasn't Been Constructed Yet And Then A Storm Brewed And Dumped Crap And Mud In It". That didn't have quite the same ring to it, but Pizza Hut are much less likely to be sued for false advertising. They can thank me with a free pizza.
My rating: 1/5
Posted by Dan Bishop at 12:41