I've lost control. My daughter is too independent. I've spent the last 3 years providing her with top notch quality animated movies, rarely straying from the Disney and Pixar route. But now she can choose her own, and now I have to prepare myself for the massive stream of unadulterated crap i'll be forced to watch over and over in the coming years.

Amelia is majorly into two things: Thomas the Tank Engine and princesses. I can handle a bit of Thomas, it's good fun some of the time, but the danger with the topic of princesses is it can easily cross from top quality Disney style to anyone else who wants to have a go. Something which the Barbie franchise seems intent on doing.

Barbie as The Island Princess starts out with some animals discovering a girl on the sandy beach of their tropical island, and deciding to take care of her. Flash forward ten years and the girl is all grown up and happily playing with her lifelong friends: 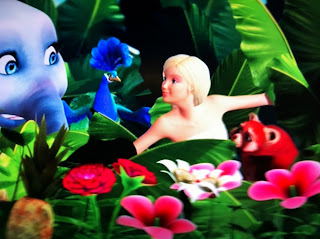 Her friends, of course, being a baby elephant, a peacock and a red panda. As an adult I can't help but wonder, how the hell did all these animals become friends? How did they all wind up on the same island? How did they adequately raise a child into a responsible young woman? Where is that baby elephant's mother? WHY WON'T THEY STOP SINGING AND ANSWER ME?! Meanwhile the children just got even happier. Barbie, princesses and talking animals? This is like, the best movie ever!
Her name isn't Barbie though, it's Ro, because that's what the trunk she was washed up with says on the front (the rest of the name being washed away, conveniently). Apparently during the shipwreck in her early childhood she wanged her head pretty hard, because she can understand and talk to animals. I like to imagine it's a delusion as result of brain damage, it's more fun that way. Anyways, everyone's happy until one day an explorer shows up: 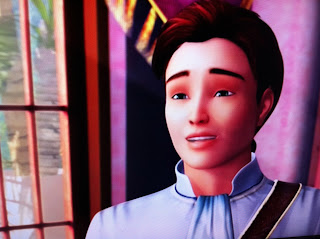 Oh, isn't he handsome? Look at those narrowed eyes. That means he's cool. Plus he has a ponytail. Oh, and did I mention he's a prince? Of course he is. This film has "princess" in the title, and the only thing a princess wants is a man to whisk her away. And whisk her away he does. Upon encountering some strange hermit girl on a remote island who believes she can communicate with animals, this guy just thinks "Eh, that's pretty cool, i'll take back to my place". Ro loves the idea, so back they go. I can understand how the peacock and panda couldn't quite teach their castaway about stranger danger, but a prince should know better.
So they arrive at the kingdom of Apollonia (it's exotic because it has a weird name). Antonio introduces Ro to his parents, King Peter and Queen Danielle. Okay. Two boring named people decided to name their son something exotic. I can live with that. But also the king and queen have stuffy English accents, while Antonio is American. Makes perfect sense. But we know that Antonio is indeed the king's son. 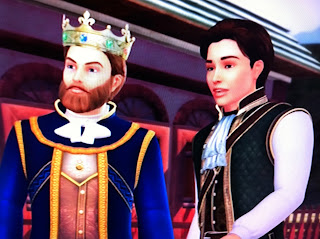 They have the exact same face. "Hmm," thought the animators, "how do we make sure no one notices our laziness? I know! We'll give him facial hair. Now he's definitely a different person". While Antonio's been away, the king's been setting up his marriage, 'cause he's tired of his son wandering off on adventures and making him feel like he's done nothing special with his life. Trouble is, the mother of the bride-to-be is Ariana, this woman: 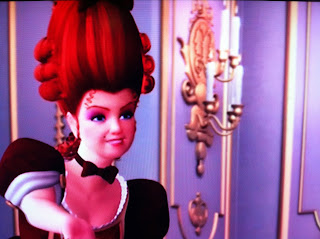 Oooh, you know she's a baddie, 'cause she's got a beauty spot and big hair. Turns out your initial assumption are correct, she's using her daughter to kill the royal family and take over the kingdom! Zomg! And she would have gotten away with it too if it weren't for that meddling weird girl who talks to animals. The prince doesn't believe in marrying a woman that she just met, he'd rather marry the girl he met the day before, because she's "different". Yes, Antonio, she's crazy and talks to animals. But by some strange coincidence she is also perfectly beautiful, must have been some good dentist animals on her remote island paradise. So, Ariana conjures up a plot to get rid of Ro once and for all. She poisons all the animals on the island, and blames it on the new girl. Off to the dungeon with her!
Will Ro escape her unjust imprisonment? Will the animals be safe? Will the evil woman get her comeuppance, and will Ro conveniently find out she's a lost princess and therefore eligible to marry her new love? The answer to all these questions is yes. Sorry for the spoiler, but the clue's in the freakin' title.
It's predictable, it's not amazingly animated, everything about this movie is sub par. But no one was trying to make an Oscar winner here, they just want to make little girls bug their parents until they part with all their hard earned cash. But joke's on you guys, I rented it for free. Now if you'll excuse me, I need to go and buy a singing baby elephant.
My rating: Seriously, bad, really bad. But at least someone liked it...
Amelia's rating:

That picture's from the deleted scene in which Ro sits astride her elephant and takes out the competition.
Posted by Dan Bishop at 06:32