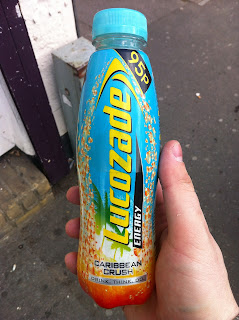 Yay, another flavour of Lucozade. I can't say there's any flavour I don't like, even the original Glucose ain't too bad. Well, I could say there was no flavour I didn't like. Until today.

Caribbean Crush is a mixture of a few tropical fruits and coconut. I'm not a big fan of coconut, so I probably should have given this one a miss anyway, but the coconut is pretty overwhelming compared to the rest. I went in especting a nice blend, but ended up drinking something like fruity coconut water.

If you like your coconut, this will probably float your boat. But if you don't, there's a far nicer tropical flavour you can get hold of anyway. For me, this is not great.