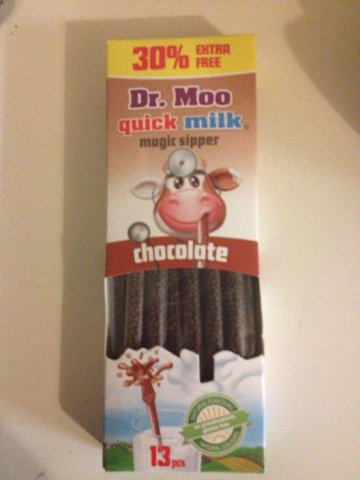 Yeah, that's what they're called. "Dr. Moo Quick Milk Magic Sipper" It's like they couldn't stop thinking of buzz words, so they kept going until they had to squeeze them over the top of the doctor cow's head light. Speaking of which, I have never seen a doctor with a strap on head light, apart from in stereotypical roles on TV, or apparently on anthropomorphic doctor cows on packaging. But it looks like he's wearing a stethoscope too, so that's okay. Apart from the fact that a cow being a doctor has nothing to do with these straws.

Yes, a whole paragraph and I haven't gotten to the actual purpose of this product. Thankfully it's adequately explained by that spurting diagram at the bottom of the packet. You take an ordinary glass of milk, suck it up through one of these bad boys, and are met with a nice chocolatey milk when it reaches your mouth. That's the theory anyway. At first it just tasted like milk, slightly chocolatey, but not really enough. But as I worked my way down the glass, the chocolatey granules in the straw seemed to break down and wear down quite a bit, giving it more flavour. I guess you could just keep spitting the milk back into the glass and sucking it up again until it was of a desirable strength, but then it would probably be half saliva.

So yes, these are strange, and not very effective, not that I expected much from 13 for a pound. It's a nice idea I suppose, a novelty for kids and the like, but if I want chocolate milk I'll probably just buy some. Or get some Nesquik, or even eat some Coco Pops. These straws are a strange addition to an already saturated turn-the-milk-chocolatey market.