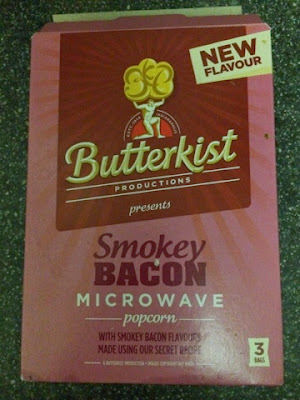 I reviewed a packet of bacon popcorn a few years ago now, but that was of dubious origin, and didn't fare well with my tastebuds. I've noticed the Butterkist version for quite a while, but was always put off buying it because of my past experience. But, spotting a box in Poundland finally persuaded me to take the plunge, you can't go wrong with 33.33p per bag. So in the microwave it went.

Smokey bacon is the correct name for this flavour, especially while cooking, as it fills the kitchen with an ungodly, smokey barbecue smell. Once the microwave had done its job, I was met with a bag of pretty average looking popcorn. It popped quite well, no burnt bits, and few kernels, so that was nice. But the taste? Well, it's better than I was expecting. Not great, but certainly not bad. It's a predominantly salty flavour, like the other bacon popcorn I tried, but not overly so. This is more like a salt popcorn with a hint of bacon flavouring, although it struggles to come to the forefront a lot of the time. The end result is some pretty bland popcorn. It could have been better with a bit more of a balance between flavours, but as it is it's not awful. I wouldn't pay more than a pound though.