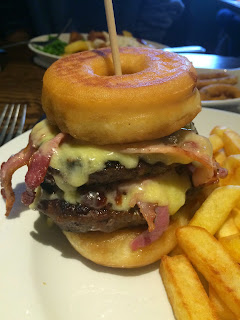 The Double Donut Burger has been all over the news the last few days, being slammed as "ludicrous and irresponsible", and "literally a heart attack on a plate" by Mel Wakeman, senior lecturer of Applied Physiology at Birmingham City University. But hey, there was already a donut burger available weeks ago from Flaming Grill Pubs, why was that not brought up in the same fashion? Probably because that one had salad in, or more likely because that one didn't contain almost an entire day's worth of calories. But hey, you've got to admit this Double Donut Burger looks pretty damn good, even if the thought of donut burger buns disgusts you. I think the one I got today actually looks better than the photo offered up to the news sites.

This monstrous burger contains two beef patties, four rashers of bacon, cheese and BBQ sauce, wrapped up in two individual glazed ring donuts. The patties are no joke, they're both a good few centimetres thick, and the bacon spills out of both sides, as seen in the picture. The cheese and BBQ sauce are laid on pretty thickly as well, so this truly was an awesome meal. While I found the Flaming Grill donut burger a little too sweet, with not much in between the buns to detract from the taste, this one is an absolute meaty delight. The donuts on either side are nice and chunky, and didn't disintegrate at all despite the juice, cheese and sauce dripping from the innards. The glazing adds a really nice, sweet kick, but one that blends in very well with the meat, making it seem more like I was eating a burger with caramelised bacon than meat between donuts.

While the Flaming Grill donut burger was merely a novelty that was fun to try, Hungry Horse have stepped up to the challenge, delivering a massive, meaty, sweet delight that is actually well worth ordering, if you don't mind so much about the nutritional content. But hey, it's not that bad. It's certainly not "literally a heart attack on a plate", because I walked away with merely a full stomach. Are Hungry Horse irresponsible for serving it up? Hell no, they're awesome. It's not like people are going to go out and eat one every day, and it's definitely not like one is going to kill you. So if you're interested, go ahead, and if you're not, I seriously suggest you take the plunge. This burger is awesome, even if it takes three hours of solid running to burn off the calories.