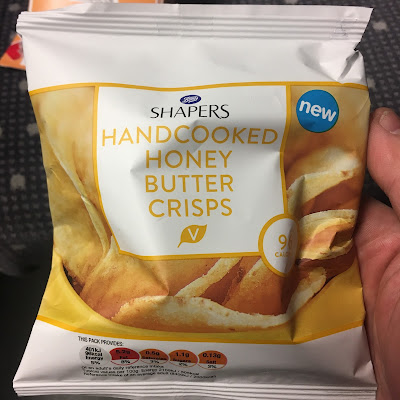 Don't worry, I won't review the entirety of my Boots meal deal from yesterday, but these were just too unique to skim over. Here we have honey butter crisps, three words that I believed should not be seen together, but here they are in one bag. Sweet crisps aren't a new thing by any means, but pairing honey and butter and slathering it on a potato chip is a bit odd, especially in a diet style bag.

These are an acquired taste, to be sure. The honey and butter are out in full force, so I admire the strength of the flavouring. Unfortunately it's such an acquired taste that the tiny bag didn't give me enough to acquire it. They're not inedible, but there's something about the sweet hit paired with salty butter that doesn't quite sit right. An interesting idea for a bag of crisps, but I don't think I'll be getting them again.