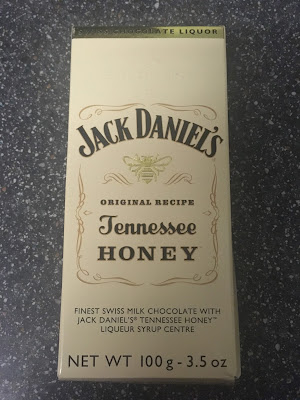 Yup, I'm still working my way through the edible Christmas presents. There's an end in sight, but I fear I may fall into a chocolate coma. So why not go out with a bit of a bang in my bar? This is a chocolate bar filled with Jack Daniel's honey syrup. I've tried out the regular Jack Daniel's chocolate before, and found the syrup overwhelmed the chocolate quite a bit. But since the actual whiskey is more palatable than the classic, I figured it would go better with chocolate.

The chocolate isn't the best quality, it's creamy, but not particularly tasty. It's still overwhelmed by the syrup, so it's not too bad, although the syrup does have quite a kick to it. It tastes like Jack Daniel's, which is good, but there's a fair bit in comparison to the relatively thin chocolate. The honey swirled in gives it a nice kick, so it's got a certain sweetness to it, and once the kick of the whiskey has gone it leaves a fairly pleasant after taste. But still, I wouldn't choose this over a regular chocolate bar. I think I'm of the firm opinion that whiskey is for drinking, not eating.