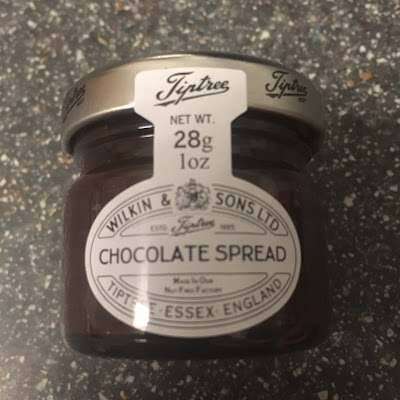 It's that odd time between Christmas and New Year's, where I endeavour to finish off all the unhealthy snacks before attempting that diet we all start on the 1st. Unfortunately, it being Christmas, and me loving food, I received a fair amount of edible gifts. Most I've tried before, but some I will post here over the next week or so. I got a nice little selection of Tiptree chocolate spreads this year, six varieties to be exact. Tiptree is famous for its jams, but they do a lot of other great stuff as well. I figured I'd start out with this regular chocolate spread before moving onto something more exotic.

I was under the assumption that one of the most important components of chocolate spread is the ability to spread it, and I can't say this was particularly easy. It's fairly firm, but with a bit of elbow grease I managed to get a fair amount across a slice of bread, spread on thick, but that's all good. So while the "spread" half of the name isn't all that accurate, the "chocolate" part somewhat makes up for it. This is a very rich, very chocolatey spread, a slightly dark, but pleasantly sweet flavour. It is a little on the sickly side, and there's a buttery flavour throughout that's stronger than I'd have liked, but overall it's a very pleasant spread. Much better than your usual supermarket fare. I'm looking forward to trying out the other flavours.