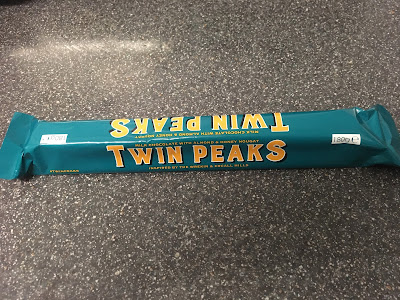 Not content with ripping off most chocolate products, Poundland have gone after that famous (and lately infamous) triangular bar. Yes, now you can pick up a sizeable Toblerone knock off for a mere pound. This is Twin Peaks, which isn't based on the David Lynch show, but apparently "inspired by the Wrekin & Ercall hills", though I'm sure they're more inspired by copying the Toblerone in a way that won't get them sued. In the process, they've managed to skimp out on the chocolate in a way that Modelez can only dream of. 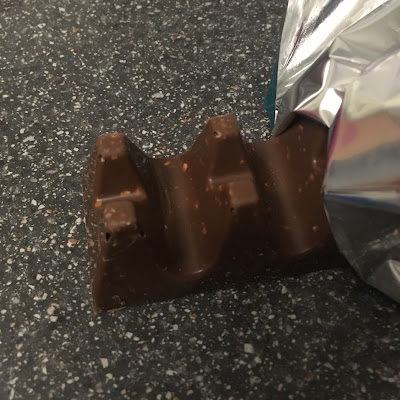 Yes, as well as borrowing the ever-growin gap between triangles, this bar also has a chunk taken out of the hills, to create that definitive "Twin Peaks" form. Thing is, they're sort of justified in this because the thing only costs a pound. In actual fact, this thing isn't too bad. The chocolate is a little gritty and not of the best quality, but it's perfectly edible, nice even. The nougat pieces add a bit of a crunch and a nice nutty, honey flavour. They help to distract from the shortcomings of the chocolate, and overall it's a perfectly decent chocolate bar, considering the size and price. So for those who don't want to splash out on an ever-shrinking Toblerone, this is an apt replacement.