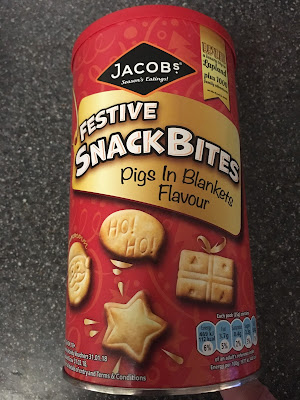 It's Christmas Eve, but it's not too late to hunt out some last minute festive snack offerings. Actually, it probably is now, it's almost 11pm. What are you still doing awake? Santa won't come if you're not asleep! Anyway, I managed to find this tub of pigs in blankets flavoured crackers yesterday, having never heard of them before. These are from Jacob's, the creators of the ever fantastic Cracker Crisps, so I had high hopes for these. Unfortunately, those hopes were soon dashed. These are not the same as Cracker Crisps. They're somewhat flaky and hollower, a crumbly cracker whose flavour isn't particularly great. It starts out okay, a certain meatiness with a hint of smokiness and salt. I wouldn't necessarily call it pigs in blankets, but it's not bad. Unfortunately that soon disappears, the flavouring just turns into a generically fake meaty taste, and mixed with the texture of the crackers, it's not a good finish. A disappointing tub. Don't buy some for Christmas Day, even though it's already too late.