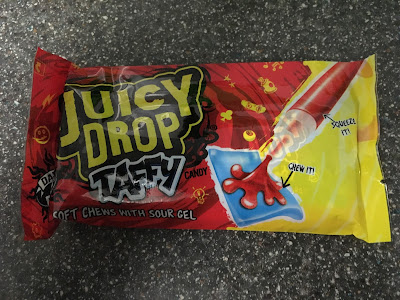 Here's an interesting little pack of sweets I picked up from the Co-Op, it seems they're always coming up with new ways to get you to consume sour, unhealthy fluids, at least this one doesn't suggest you spraying it directly into your mouth. This is Juicy Drop Taffy, which comes with a tube of sour strawberry gel, which you can squeeze onto the provided pieces of blue raspberry flavoured taffy. Taffy is basically a chewy sweet, for those not down with the lingo. 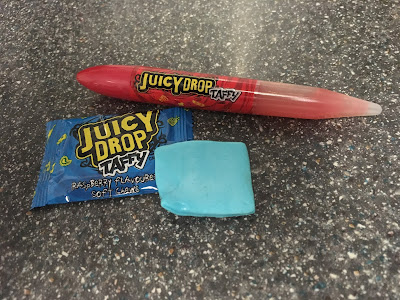 Look at that, it's got that appetising appearance of... Blu-Tac. To be fair, the flavour isn't far off either. Not that I've eaten Blu-Tac, but this stuff is rather bland, just a hint of blue raspberry that's lost in the overly chewy chew. The stuff in the tube is better, a more flavourful strawberry offering that isn't particularly sour, but does have a bit of a kick to it. It's thick, somewhat plentiful, and definitely bad for your teeth. You can get quite a bit on each piece of taffy, so there's no danger of running out, but the whole thing of unwrapping individual chews and meticulously squirting on the sour gel is just too much faff for not much reward. A bland chew with some slightly sour stuff on top, there are far better things out there.