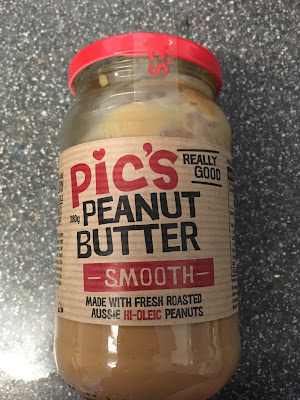 The peanut butter market seems to be expanding lately, with imports and fancier jars turning up on shelves. A new addition at Tesco is this jar made from Australian Hi-Oleic peanuts, whatever that means. I've always had something of an aversion to crunchy peanut butter, so I went for the smooth jar, which still promised me it was "really good".

I know oil separation is natural for jars of peanut butter, it's no different here, but it's something of a problem. I tried mixing the stuff up, but it's still pretty sloppy, and it makes a bit of a mess. So not the best start, but once it's spread across some bread it's still good to go. It's a pretty nice peanut butter, not particularly sweet, since it's just peanuts and salt, but it tastes natural, and definitely has a bold peanut flavour. It is quite sticky, which I don't find too appealing. So some good points, some bad, I wouldn't rank this among my favourites, but it's not too bad. Not one for those with arachibutyrophobia. There's a word of the day for you.