Today's Review: Pound On My Muffin By Shira

There's a new music prodigy on the scene, her name is Shira, and she has released the video to her song, "Pound On My Muffin". It really is amazing stuff, have a listen/watch:


A masterpiece, I'm sure you'll agree. Kudos to director Cornelius3, who clearly wasn't awesome enough in his first cloned incarnations, but possessed a fine directing talent in his third malformed body. Speaking of malformed bodies, I'm sure that either Shira has one, or doesn't quite know what a muffin is, she seems to be pointing towards the badonkadonk region whenever she gestures, but everyone knows a muffin is a vagina. Silly girl.

Anyways, the song is sung by a girl lamenting that boys don't want to give her nothin', 'cause they just want to pound on her muffin. The video is so cleverly done in the way that it provides us with a double entendre. Does Shira mean that guys just want to stick their bits inside her corresponding lady bits, or does she mean they want to drum rhythmically on her baked goods (which in the video are cupcakes)? That's how you get past the censors, people.

I'm trying to decipher what these lyrics are to ascertain the meaning of the song, but it's pretty hard due to the fact that my ears are bleeding. From what I can make out, Shira seems to want something from men who want to pound her muffin, but only gets mad when after the act of love making, the men don't leave something behind. One guy gave her loads of drugs before he used her body, so that's cool, but only if he keeps on providing her with free drugs afterwards.

We have a contribution from a loveable scamp called Asco, who mentions that Shira doesn't play him because he's always paying her, so from this we can conclude that this lady doesn't just let people pound on her muffin, she requires payment in cash or drugs. What a great role model. Things do get a bit confusing if you're watching though, because the assistants in Shira's bakery wear aprons that say "Pound on my muffin", which we know is the name of the song, but it could be misconstrued as an invitation by the patrons. Also, they seem to have not had enough footage when they cobbled together the video, because they inserted some clips of a guy sleeping: 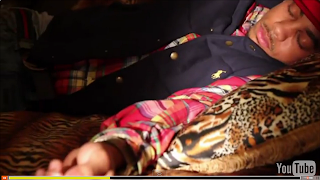 Or maybe he just died from the whole ear bleeding thing. I know that feel, bro.

Email ThisBlogThis!Share to TwitterShare to FacebookShare to Pinterest
Labels: Music