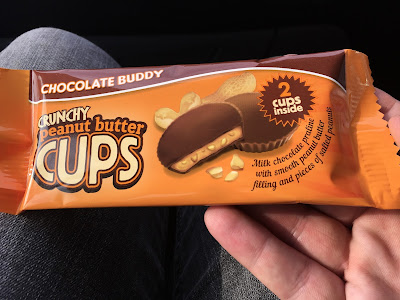 Here's another treat I picked up from the world foods section at Sainsbury's, some peanut butter cups that aren't Reese's, and for only 50p a pack! I wasn't expecting much from these, but they promised some praline in the chocolate, so I was interested to see how that worked out. Turns out it's a pretty sweet peanut butter cup. The chocolate is thick, with a creamy, sweet praline flavour. I'd say it's actually better than the chocolate in a Reese's cup, but unfortunately the peanut butter isn't quite up to scratch. It's nice enough, a bit crunchy and salty, but it's not the best I've had. It all evens out to a fair contender to the Reese's throne, and they're worth trying out if you want something a little different in your peanut butter cup.