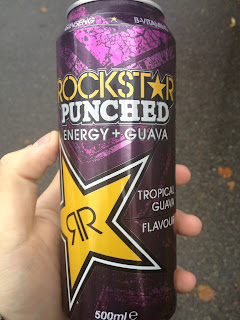 Since my successful diet a few months ago, I have fallen back into some bad eating habits, hence why I have reviewed a different snack every day for the last month or so. But one thing I have managed to stay away from is sugary drinks, because most have almost enough to give you your recommended daily dosage. Diet Coke and sugar free energy drinks have been my beverage treats, but there was something about this can of Rockstar that really caught my eye.

Yes, I'm a sucker for tropical flavoured drinks, and since I've never seen a sugar free tropical anything, I took the dive and opened this sucker up. A tropical flavoured energy drink sounded fantastic. Full of flavour, and an energy boost to boot. That's what I thought, anyway. Then I took a sip.

Rockstar Punched? Punched is right, drinking this is like being punched in the face by the Kool-Aid Man. It's an intense flavour alright, in the way that drinking a can full of sugary syrup is intense. At first I thought it was just that I wasn't used to so much sugar in my drinks, that I'd get over it soon enough. But sip after sip, this sickly syrup taste permeated my very being, and despite me not wanting to waste any, I couldn't finish the can. This drink defeated me, and left me feeling sick for a good hour after. I think I'll stick with the sugar frees.