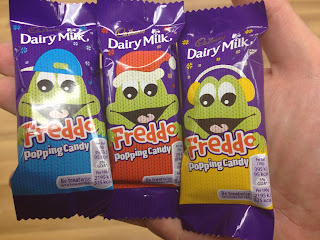 There is nothing more often used to convey dismay at the state of this country than the price of a Freddo. You see, Freddos used to be 10p, but now they are more than 10p, so clearly everything has gone to hell. No matter that the price of everything has gone up, as has the average wage, which is exactly what happens every year. No, it is the Freddo, the small, unassuming chocolate frog, that bears the burden of exemplify the state of the nation. Well, normally I disagree, but seeing as these new Freddos cost me £1 for two, I'll pull the nostalgia card out. See, when I was a kid, Freddos were only 10p. But Freddos also didn't exist in popping candy, Christmas themed form, so I guess I don't mind dropping a little extra money for something new and exciting.

Exciting may be a strong word. It's definitely a new direction for Freddos to be taken, but it's a very safe one. This chocolate is exactly what it says on the packet, a Freddo with popping candy inside. Same chocolate, but with a big of snap, crackle and pop. There's a fairly generous amount of popping candy in here, but it was all over a bit quickly given the size of the bar. All in all, while it's a nice bar, I think it's fairly uninspired. These are Christmas themed Freddos after all, why not go for white chocolate? That's a Freddo I'd fork out for. These ones? Probably won't be buying any more.