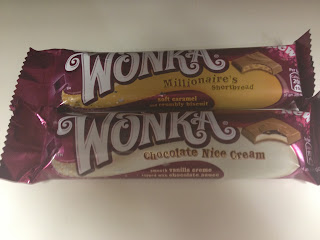 I've been excited by the prospect of these new Wonka bars, but frustrated about having to wait until October. But, as other fellow snack food pundits have informed me in recent days, these two flavours are available already, if you can stumble upon them in convenience stores. So it was my mission today to pop into every newsagent I could find, in hopes of finally getting my hands on these bars. My search could have lasted as long as an everlasting gobstopper, but they happened to be in the first shop I went in, a mere ten minutes from my flat, so the mission wasn't a particularly long or arduous one, but I can't argue with the results. 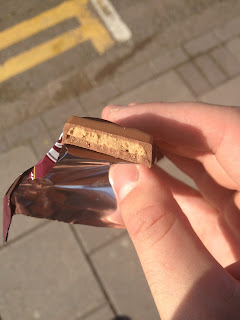 First I tried the Millionaire's Shortbread, which funnily enough has all the marks of millionaire's shortbread. According to the packet it contains "soft caramel and crumbly biscuit", and as such I was expecting a distinct layer of caramel to be sitting on top of the biscuit base. Alas, this was not the case, which is not all too surprising seeing as the bar itself is quite thin. Instead, the caramel flavouring is infused within the shortbread, and it creates a nice even flavour overall. It's a novel thing to shove into a chocolate bar, and it's a very nice attempt at doing so. You could say it's scrumdiddlyumptious. 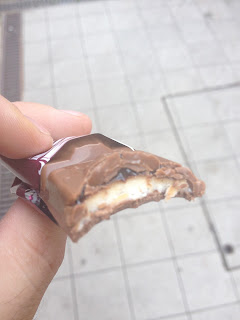 Chocolate Nice Cream sounded even more novel though. This one boasts "vanilla creme topped with chocolate sauce", which is probably every child's dream chocolate bar. Well, both elements are certainly present, and nicely layered. The vanilla creme is quite nice and smooth, but it's certainly overwhelmed by the chocolate sauce. I'm a bit divided on the sauce, because while it is very sickly and quite sticky, it tastes exactly like the bottled kind you'd pour liberally over your ice cream as a kid. Oompa Loompa doobity goo. It's an authentic experience, but since the creme doesn't really taste like ice cream, it ends up being a bit of an odd match, and my senses were a little overwhelmed by the taste of the sauce. Still, it's certainly a novel idea, and is certainly tasty, just a little out of balance.

So there we have it. Two of the new Wonka bars. There's still Crème Brûlée on the horizon, but for now these should be available in a good few shops around. So don't be as slow as a Slugworth, go get 'em. I'm sorry, all these Wonka puns have been awful.