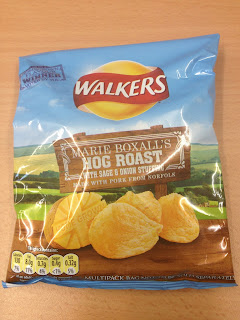 I'm not too much of a crisp person. I certainly enjoy a nice bag, but I don't chow down every day. I've especially never been a fan of meat flavoured crisps, they all seem to taste the same, uniformly un-meaty. But, Walkers has brought out a new flavour, and although it is meaty it did sound quite nice. Just reading that name brings thoughts of succulent, juicy pork, with soft, warm, flavoursome stuffing. But how would that translate into a crunchy, cold, flat crisp?

Well, they're not too bad really. They certainly have that distinctive "meaty" crisp taste. It definitely didn't feel like I was tucking into a pig. So at first, I was a little disappointed, but instead I tried to focus on what flavours I could taste. As far as the sage and onion stuffing goes, there is certainly an oniony hint to these crisps, and the aftertaste is actually quite herby. It's like these are a combination of cheese and onion and meat crisps, and while I'm certainly not a fan of either I must say these are pretty nice.