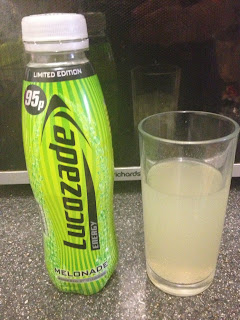 I saw Kev's review of this interesting limited edition this morning, just before I was about to pass my local newsagent. Lo and behold, upon popping in, this shiny green bottle greeted me from a nearby shelf (not the fridge sadly). Yes, it's another flavour of Lucozade, and after the success of pink lemonade, it seems they've decided to anagram it up while shoving a watermelon into a bottle. Yes, it's a watermelon flavoured Lucozade, which intrigued me, as I don't remember ever having a watermelon flavoured drink. Is this flavour filling a gaping hole in the market, or is there a reason we don't see watermelon drinks?

Well, it's actually pretty nice. The first think I noticed is that it has a nice mellow colour, when I was expecting a sort of radioactive green to match the bottle. It certainly has that distinctive Lucozade glucose taste, but the watermelon flavour is very intense, much like that of a similar flavoured Chupa Chups or Jolly Rancher. The intense flavour coupled with the glucose does get a little intense at times, but overall the drink is actually quite refreshing. There are certainly better flavours of Lucozade out there, but this one is original and quite well made. I hope I can pick up another one before they disappear.