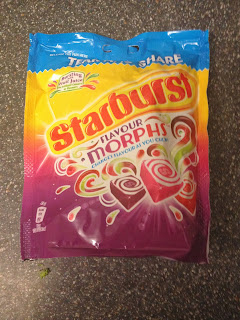 Ever had those Confused Skittles? They look like one flavour, but taste like another. Crazy! But now the flavour technology has changed again. Now you can grab a bag of Starburst Flavour Morphs, and witness a flavour changing experience as you chew. Well, witness it with your tongue anyway.

Yes, these sweets sound awesome on paper. You start out with one flavour and get another. I've been wanting to try these for a while, but they were always a bit pricey for my liking, as I wasn't sure how exactly this flavour changing thing would work, or if it would be any good. Turns out my apprehensions were somewhat justified. 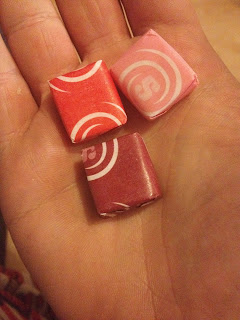 First of all, there are only three flavours. They're all reds and pinks, so they're on the good end of the flavour spectrum, but I still wish there was a bit more variety. We have strawberry, cherry and raspberry, and they all taste quite nice at the start. Then the change begins, and what new flavours do we get? Blackcurrant? Orange? Lime?

Well, not a lot actually. Instead of the flavours changing into another, singular fruit, we instead get "strawberry pear", "cherry lime" and "raspberry pear". Yes, two pears. Basically you chew one nice, reddy flavour, and then a lesser green flavour turns up and crashes the party. The new flavours aren't really too noticeable, and they don't really blend too well with the initial taste. Plus I found that after chewing my way through one of these, there was a weird, bitty residue that took a lot more chewing to get out of the way.

I'm quite disappointed with these sweets. They looked like a good idea on the packaging, but there's just not enough variety, and the flavour changing system isn't really implemented that well. They're not completely awful, but they're certainly not as nice as regular Starburst.