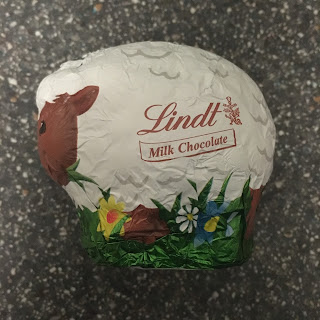 It's not even the end of January, and I'm struggling to find new Easter products already. Perhaps more will come out closer to the time, but meanwhile here's the Lindt sheep. It is like a Lindt bunny, but it is shaped like a sheep. There's really not much more to say about it. Yes, it's slightly boring, but it's Lindt chocolate, so it's still good. I will say that there are significantly less angles on this chocolate animal, which means the chocolate isn't as thick in some places as I'd have hoped. I think it evens out a little in terms of how big the sheep is compared to the bunnies of the same price range, but those thicker bits are nice. Either way, it's nice, creamy chocolate, and it makes for a nice little Easter chocolate treat. Not baaaaad. Although that joke was.