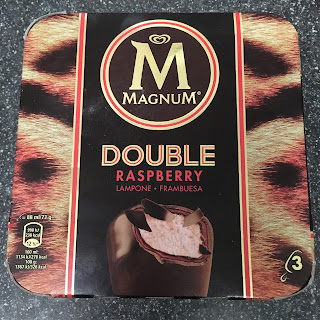 Walls brought out a fantastic selection of Double Magnums last year, my personal favourite of which was the peanut butter variety. I thought the original range was enough, but it turns out they weren't done. Now there are two more flavours available, coconut and raspberry. The former didn't appeal to me much at full price, I'll probably pick some up on offer. The raspberry however, that sounded good, and although these appear to have been around for a while in the US, it's the first I've seen of them over here. These consist of a raspberry ice cream, covered in two layers of chocolate with a raspberry sauce in between.

The pink raspberry Magnum is already one of my favourites, so I knew the raspberry ice cream was good stuff. It's smooth and creamy with a lovely fruity flavour. The double chocolate shell provides a thick, satisfying crunch, and while I don't think it's as great a pairing as the white chocolate coating on the pink raspberry, it's still a pretty good blend. The raspberry sauce adds that extra hint of fruitiness to break through the increased amount of chocolate, and while it does get a little sickly towards the end, it serves to enhance the flavour more than overwhelm. This is another good addition to the Magnum Double range, and I'm looking forward to trying out the coconut soon.